Mediterranean food is known all over the world, is considered the healthiest cuisine in all respects. Although it is viewed as a cuisine that covers all the countries on the Mediterranean Sea, it is not the same in all of them, with multiple variations depending on the culture and cuisine typical of each country.

Also known as “the cuisine of the sun,” Mediterranean cuisine has proven to be the healthiest and most balanced, thanks to the richness of its flavors and the very healthy ingredients it contains. Such is its success that even in UNESCO declared it Intangible Cultural Heritage in 2013, recognizing that it has multiple benefits for our health and to improve our lifestyle.

This cuisine has managed to include multiple cultures in the same culinary style, while each one of them still retains its flavors. All of them share the same essence that can be differentiated from the rest of the world’s kitchens but using very different ingredients and preparations.

When we talk about Mediterranean cuisine, we can talk about Italian, Spanish, Greek, Moroccan, French Provençal, or even North African cuisine, all being part of the same set, but each being unique and different from one another. This phenomenon is due to the history of this area of the planet, the connection between all those territories over centuries and the influence of the same warm climate on all of them, make them share the same variety of food and customs, that can hardly occur elsewhere in the world.

The main ingredients that make up this cuisine are vegetables, fish and seafood, olive oil, fruit, flour, meats, and wheat, which combined in a balanced way make up the tastiest and healthiest cuisine in the world.

Olive oil is the most used ingredient and the one that all Mediterraneans include in their recipes. It has been recognized many times for its beneficial health properties, but it is also an essential ingredient to create unique dishes with twice the flavor. It is also common to find the olives themselves in some preparations and salads, adding a very characteristic touch of acidity to the dishes.

One of the main features that distinguishes Mediterranean cuisine from the rest is its tendency to introduce raw vegetable ingredients into its dishes, while using olive oil as a dressing. Fresh vegetables are the hallmark of this cuisine, being used uniformly by all Mediterranean countries.

Among the most outstanding are peppers, eggplant, tomatoes, artichokes, legumes, onions, lettuces, and okra, among many others. The preparation is also very diverse, and can be baked, grilled, raw or mashed.

One of the most famous ingredients, but also one of the most moderately used are meats. They are usually cooked on the grill along with a wide variety of spices and olive oil, which will not only give the meat an exotic and different flavor but will also bring multiple nutrients and extra business for our health.

On the other hand, inside the meats there are sausages, such as salami, the ham being its star product and the most valued by Mediterrenean world. Ham is the most outstanding sausage in Spanish cuisine, being exported to all the countries of the world for its exquisite flavor and for the multiple benefits it has proven to have for health in the long term.

On the other hand, in a cuisine with the name of the sea, what I can never miss are fish and seafood, with some of the freshest and healthiest dishes in all Mediterranean cuisine.

In the Mediterranean, bluefish, such as tuna or salmon, are the fish that cook the most, being the richest in omega-3 fatty acids.  These fish have multiple benefits that have already been recognized by the scientific community, being useful for the prevention of cardiovascular diseases and helping us in weight loss.

Last but not least, we find widespread use of all kinds of herbaceous plants and spices that add a unique touch of flavor to all preparations. Depending on the country, the use of spices varies, being in the Moroccan culture where they are most used. Still, in general, already all the dishes of Mediterranean cuisine carry some kind of dressing through fresh herbs or species.

Below are some of the highlights of this cuisine. Of course, there are many more and equally tasty, but these are some of the best known and the ones that best reflect the essence of this wonderful cuisine.

This salad is one of the star seedlings in Greek cuisine and also one of the most complete of all Mediterranean cuisine. Although very basic in terms of presentation, it can be served on a plate or inside a pita bread, it is composed of the main groups of food essential to maintain a complete diet: tomatoes, zucchini, cucumber, lettuce, chickpeas and chicken.

The special touch of the dish will be provided by the tzatziki sauce, which will serve as a link between the rest of the ingredients.

Couscous is another great ingredient in Mediterranean cuisine, being more typical of Moroccan cuisine, although it is now used all over the world. A couscous salad will give us a complete meal, full of flavor and contrasts. It is usually prepared with boiled couscous, fresh lettuces, dried or fresh tomatoes, cut black olives, and feta cheese, asking you to also add some seeds such as sesame to further enrich the dish and make it more digestive.

Of course, once all the ingredients are well mixed, they will be added a good amount of olive oil that will give them unity and a lot of flavor.

Roasted red pepper Hummus is a really delicious variety of Hummus. Very simple to prepare, and with all the benefits of chickpeas and extra virgin olive oil as its main ingredients, this simple sauce will serve as a snack or companion to multiple dishes.

Check out our proven 28 day Mediterranean Diet Meal Plan.  There have been over 1000 people that have tested it out and loved it!

So stop wasting your time and money on diet plans that don’t work and check it out now.  Click the image below:

This website was created for all the people out there who struggle to have a healthy lifestyle. We provide tips, tricks, and recipes to help you make your diet successful! 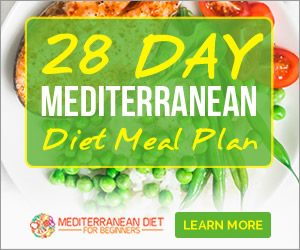